So, as you can see by our non-slick, unflowery, blog- web design isn't my thing. Heck, I just don't have the time or desire, as instead, Dustin and I are out there building, traveling, hosting workshops, and well, generally trying to kick as much ass as we can. We've been doing so professionally since 2009 when we hosted our very first FULLY HANDS-ON workshop (something you RARELY get from other events), well before everyone and their grandmother's former scuba-instructor decided to jump on these classes as well. There's an avalanche of tiny house workshops out there now, all in the wake of the 13.5 tv shows on the subject. Some of them are solid, but most are absolute crap, so let me explain what we do, and why we've been doing them for so long.

Also, Thank you in advance to those who share and spread the word on this, as NO, its not a photo post featuring some gorgeous supermodel- NO, this notice doesn't have some click-bait title like "WOW! You WON'T BELIEVE what lies beneath the trap door in this abandoned garage!", and triple-NO, its not a post about a young cutesy couple who "simplified" their lives and bills, buy having someone build a $140,000 tiny house for them.
None of that silly crap. Never. 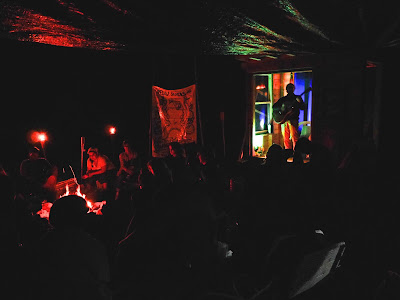 Live music by the fire, on a lantern-lit mini stage, after our guest speakers (last year)

I can add a ton of fun photos below, and some video links of past workshops (and I will), but let me just sum things up by saying that this isn't our first rodeo.

Dustin and I have taught workshops, built for museums, and design consulted "From Fargo to Sydney"and just about everywhere in between. 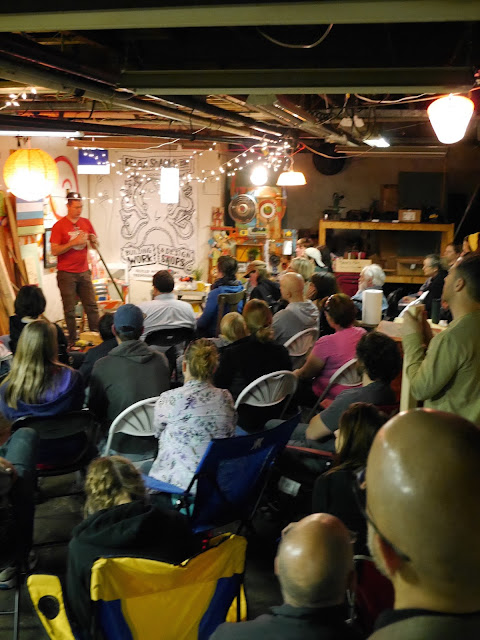 Palo Coleman, bamboo joinery/construction demo at our CT workshop this past year....

So, WHY SIGN UP for this, and not another workshop?

There are too many reasons.....
-Dustin and I are former HGTV hosts ("Tiny House Builders"). We've also been featured on, and hosted other programs for HGTV and the DIY network.

-We've designed for many other tv shows, magazines, charity events, and design blogs. MANY.

-Deek has authored THREE books on the subject, going back to 2009. His most recent book "Microshelters" was picked up nationally by Lowes and has made the best-sellers list.

-Its a HANDS-ON workshop- no staring at a power point presentation eight hours a day. You're getting dirty, having fun, and ACTUALLY BUILDING. There is no real substitute for this.

-We have several people who will be attending for their FOURTH year in a row- which is saying something.

-Forget a rented function room at the Ramada Inn, we're off-grid on TEN private acres, with TEN tiny cabins, shelters, and funky shacks on the premises. THINK and design outside the box while BEING outside the box. 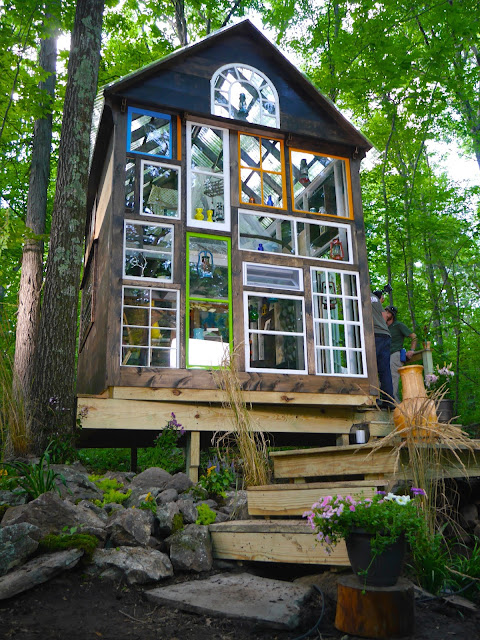 -We have MULTIPLE projects/builds going on at once, and you can move to each group as you please so as to get a taste for many styles of construction, various approaches, and all with different instructors.

-Yes..... different instructors. We usually have about EIGHT pros at each workshop. There is no shortage of people to ask questions to. We want to make sure that you get as much personal building, and brain-picking time, as possible. You get our personal email too, should you have questions AFTER the workshop.

Deek in Australia giving a salvaged-windows demo to a sold out class....

-Its MORE than just tiny houses. We mix in collaborative art and decor, salvage construction, and heavily force you to "Think Outside The Box". 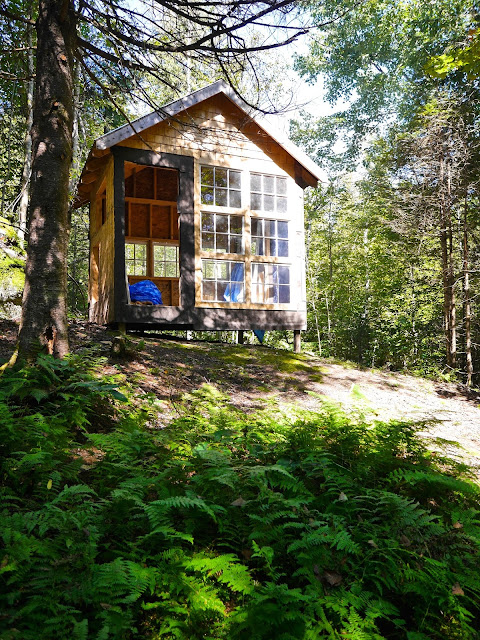 -Does their workshop have a big-ass PIZZA PARTY ice-breaker by a bonfire, fireside guest speakers, a GHOST NIGHT HIKE, fishing, LIVE MUSIC from a candlelit stage in the woods, bamboo demos, Shou-Sugi-Ban Japanese techniques, and a Kong Island-like entrance gate, topped by a giant Owl head?? Nope.

-Its NOT a 9-5 workshop. The building continues until the sun goes down, and then the speakers and discussions begin.

-Tree Houses- we have tree houses, and you can STAY in them.

-The woods of Vermont, and the neighboring towns are GORGEOUS. I mean Norman-Rockwell-painting gorgeous. There's a GREAT local swimming hole, covered bridges nearby, and so much more.

-Door prizes and Tiny House Trivia..... we want you to leave with swag! Help us DOWNSIZE our prize closet! ;)

-"Robot Grove"- do the other workshops have a pine grove deep in the woods with 10' tall recycled-material-built weird-ass robots? Nope.

-Want to stay in an off-grid, solar log cabin? Yep, we have one of those too....

Its $399 for THREE DAYS- and again, they ARE NOT 9-5 days. The first two nights run until 10pm. Its a TON of contact hours, fun, networking, and skill developing.

This is the same price its been for five years, and again, this is no 9-5. Many other workshops charge this much as well, and DON'T let you build.

YOU WILL have fun and learn LOTS- unless you're completely dead from the neck up.

This is an "AT YOUR OWN RISK" workshop, and you additionally will still have to sign a waiver to be allowed to build with us. By signing up, you are in full agreement and understanding with this.


Refunds. Large Font so that you can't claim "But Deek I didn't see the refund policy!"Full refund up until 30 days before the workshop starts. Thirty days, not twenty nine- Thirty. After that, rain check/credit only- which other workshops don't even do- we're being VERY fair with this credit. If you don't show, and don't tell us, and the workshop had begun, there is no refund. PLEASE, PLEASE just plan accordingly and make sure you have the time off and reserved- its a total pain to reschedule and shift/change attendees- we'd rather focus on planning for the actual workshop!

Any questions, ask them below, or email at newenglandrockpress at gmail.com

Posted by Derek Diedricksen at 7:46 AM