"Every once in awhile ya' gotta blow a few bucks on a blue glass "booze-eagle" for your studio- just to spruce up the place...." So, among other things (readying for the "Tiny House Summer Camp 3" workshop (Sept 18-20th- 2015) and having already hosted workshops in Connecticut, Fargo, ND, and even Sydney, Australia this year.... never mind builds in St. Louis, Burlington, VT and Massachusetts, I've ALSO been working on setting up my new art studio. This studio is not a public store, but a space for creating and messing with new ideas, AND will be the site, here and there, for a couple mini workshops down the road.

"But Deek, didn't you already have an art studio in a factory space?", you may be thinking. Yes, I did- but it was my goal all along to place some lighting, art, and fun, in an abandoned storefront in my downtown-in-need-of-help, so when the opportunity presented itself, I moved from one private space, to a public one in Stoughton, MA. 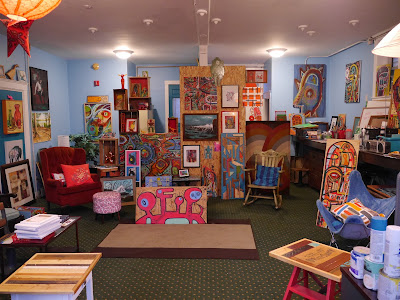 So, keep checkin' ole Relaxshacks.com for updates, as in July, we just may have a little shindig/event/class with speakers, projects, and more! newenglandrockpress@gmail.com if you might want to sign-up.... it'll either be one, or two, days....

As for the old studio, JUST before I moved, The Boston Globe came out and did a little photo session/article.... I do miss that place, but the new studio certainly has its advantages! 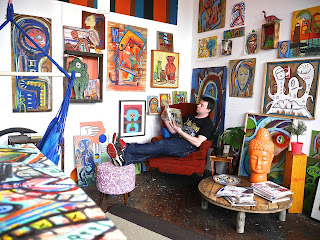 Hey, by the way, I also have a BRAND NEW book out in about two months- one you can already pre-order on amazon.com and elsewhere.... its called "Microshelters" and showcases 57 cabins, tiny houses, tree houses, forts, and more- with six full-out plan sets in the book too! 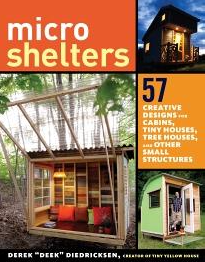 Posted by Derek Diedricksen at 7:42 PM