YOUR TINY HOUSE- why not STILL keep it simple?

WHY NOT STILL KEEP IT SIMPLE?

With tiny house tv shows spreading like wildfire, the media covering the subject more and more, and what with the newer 5067.8 tiny house blogs out there (forget the 430 twelve-page e-books), I've been noticing a trend in tiny housing in that the homes are getting bigger, fancier, more gadget-laden, and WAY more expensive. Television, a whole world of "you gotta wow-'em at every turn" is part of this newish direction in that networks spread, or create, a skewed vision of what is "the norm". But I feel its also due to the fact that when an idea starts going mainstream, you're going to find newly introduced folks who love tiny houses for their "cute factor", but who still yearn to squeeze the pool table and triple stack washer onto a quintuple-axle travel trailer. I call that approach "Ten gallons of shit, in a five gallon hat". It usually doesn't work so well, especially once you try it on.

I'm not knocking these houses- not fully, and not all of 'em- but I'm starting to feel that some people are losing sight of what a decent chunk of this scene's impetus is about- keeping things simple, affordable, and realistic. Or maybe I feel that some are just overlooking the fact that a simple home could work just as well for them as an over-the-top Rube-Goldberg-esque one.

I myself don't live in a "tiny" house, but a damn small one, with a family of four and one big-ass dog. I also grew up in a small home, vacationed in small cabins, camped with the boy scouts in small camp structures, and have built and designed a TON of tiny houses, art studios, backyard offices, and tree house cabins for clients, so I like to feel that I know at least a little bit about what I yammer upon. This is just opinion though- and everyone's got one.

Anyway, more and more recently, I'm internet-inundated with images of completely over-the-top tiny houses that seem more hell bent on creating something so incredibly high-end, or weird, that the viral-video or Huffington Post headline seems more so the goal, and not the livability, or cash-factor, of being in such a space. Eclecticism, IS good, mind you- I've never had a problem with it, or inventiveness, but I just feel that the media is starting to portray this movement that is often rooted in living for less, with $89k homes- hence this mini, meant-to-be fun, rant.... 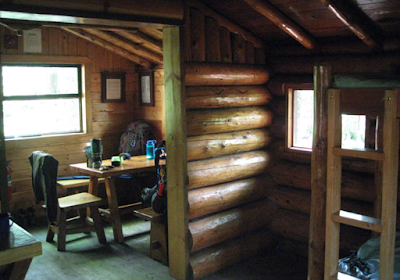 I was reminded of my personal love for simplicity when I stumbled across this photo (further above) from the blog www.blackcoffeeatsunset.com. This gorgeous little cabin (and I wish I had more interiors- yeah, yeah, I can foresee the complaints already) is so damn simple in its look, build, roofline, and presentation, that to me, its just friggin' great. Why try to reinvent the wheel thirteen times over when a good many who came before you probably had their crap together more than you or I? I'm not saying don't build in a secret passage from a grandfather clock up to your lofted master bedroom (that actually would be completely awesome(!), for the record), but make sure that what you employ into your design, suits you, and makes sense- that's all I ask, and really, all I'm getting at. That stobe-lit, glass unicorn prow on the front of your house might land you a few kick-ass blog stories, no doubt, but remember that you later have to live with that stupid things once its "old hat". (In all fairness, I DO build and design some bizarre things, but all of them are affordable, and serve a function (or are based on the clients request)).

Check out that lead photo though- the cabin you see doesn't have nineteen wind-dragging and leak-prone gables, its devoid of a pair of fold-down decks, and you're not going to find $35,000 of solar panels cantilevering from its roof at odd angles, nor a ergonomic hammock woven from hipster mustache trimmings, but what you do see is a cabin that will keep your ass dry, warm, and that could be built for very little money......and THAT, I'm reminded, is why I, personally, am in love with tiny structures. I'm not everybody, and better than no one (well, maybe except the cast from "Honey Boo-Boo ;) ), but that's where I'm coming from- nothing more.

That cabin- its vernacular design. No bells, whistles, or Inspector-Gadget like transforming, quadruple-use $5600 kitchen appliances (that you probably won't use anyway).

So, while some of the fancy houses (I'll freely admit) sure are cool as hell to look at, and do offer some awesome new takes on architecture, I'm simply reminding you to at least consider to KEEP SHIT SIMPLE. Its not a contest, and competing with the micro-Joneses is the last thing this scene should be about, so perhaps just relax a bit with those visions of Ewok-bridges to your fourth wine loft. Yeah, these out-there ad-ons are fun, but paying for them, and later never really utilizing 'em isn't.

Again, my lil' opinion- meant to be just fun- and of course "to each their own"

'Hope you're all well!

-Derek "Deek" Diedricksen's work has appeared in the NY Times, Boston Globe, China Times, and about twelve zillion other media formats. He, and his brother Dustin, were hosts of the HGTV mini-series "Tiny House Builders", and have built and designed for The DIY Network, The History Channel, and for clients and art galleries ranging from Fargo to Sydney, Australia, and everywhere in between. Deek is the author of "Humble Homes, Simple Shacks", and the upcoming book (Storey Press), "Microshelters".


Posted by Derek Diedricksen at 12:53 PM