HANDS-ON BUILDING AND DESIGNING- TINY HOUSE WORKSHOP #5 (with an emphasis on budget and recycled-material building)
WE WILL ALL BUILD A TINY STRUCTURE TOGETHER!
November 15-16-17 Canton, MA
As featured on NPR, Yahoo.com, The Boston Globe, Make Magazine.... 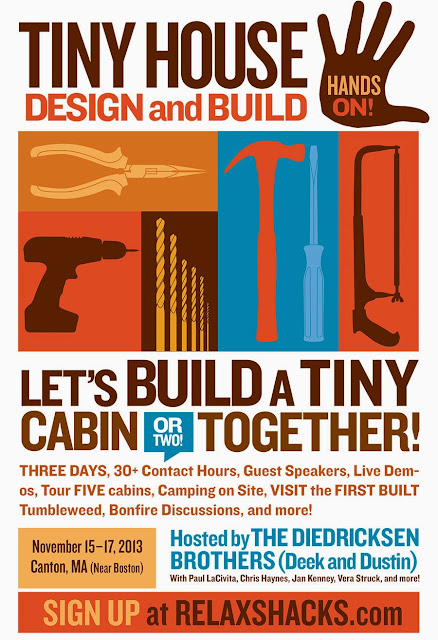 We keep getting asked to do another one, so here goes!
30+ contact hours of learning, building, designing, and networking
Each previous workshop has SOLD OUT, as we limit the number of attendees to around 24 or so to keep things intimate and to be able to give individual attention- if interested, secure your spot sooner than later....
Hosted by
The Diedricksen Brothers (Deek and Dustin)
with Paul "Touks" LaCivita
AND a roster of guest speakers!
SEE FIVE of Deek's Micro Cabins (featured on Yahoo.com, The History Channel, and The NY Times)
AND visit THE FIRST-EVER BUILT TUMBLEWEED TINY HOUSE
--------------

"YOUR chance to build, work, and design alongside an HGTV Host, a Salvage Addict/Pro, an Environmental Engineer and House Designer, and many other tiny house pros (not to mention our guest speakers and tours)! BUILD a tiny cabin that will be showcased in an upcoming book, in a video tour (for "Tiny Yellow House") and Relaxshacks.com, and beyond!" MEET and Network with a tiny house enthusiasts- ones who just may help you with your eventual project, and even CAMP OUT on the premises! 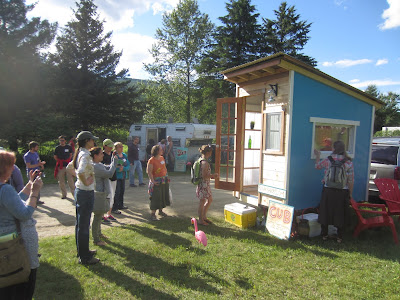 "Tiny House Building Campout #5" is a HANDS-ON/get dirty workshop, a THREE day (and night) event (a fri-sun, but if you can only make the sat and sun, you'll be fine, we'll get you up to speed on what went down Friday). NOVEMBER 15, 16, and 17th are the dates- rain or shine. There will be LOTS of hands-on building, as we work on a small group build together, campfire discussions (making each day FAR more involved than a mere 9-5 workshop), slideshows, live demos, a good deal of focus on building for less, and with recycled materials, AND Dustin Diedricksen will cohost this event again- he's an environmental engineer and designer. Paul "Touks" LaCivita, a scrapper/salvager extraordinaire, will also be part of the team that helps to construct our weekend project. Add in a pizza-by-bonfire mixer, a tour of five of Deek's micro cabins, and in depth look into his salvage techniques and stash, AND a field trip to a tiny house (THE first built (EVER) Tumbleweed Tiny House), and it all makes for one heck of a LOADED weekend of learning, actual contact hours, brainstorming, designing and problem solving on the fly! 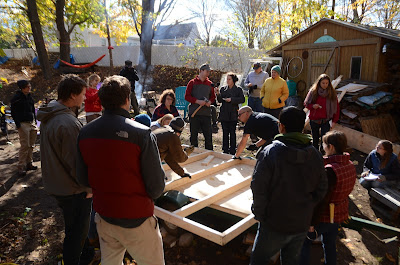 GUEST SPEAKERS....
CHRIS HAYNES- A tiny house dweller who has built BOTH a Tumbleweed XS AND a Tumbleweed Bodega! Chris will talk about his super-insulated home, and set-up a small solar array/system for us.

JAN KENNEY (from PA)- Jan lives in one of THE SMALLEST HOUSES on the scene (formerly the home of Gregory Paul Johnson). There's a lot to be learned from her stories of living in a space under 100 square feet in size. She's super fun and spunky- you'll love her!

VERA STRUCK - Vera is the impetus behind an in-the-works, mobile, educational, tiny-house-classroom on wheels that she has dubbed "The Silver Bullet"- she also makes some of the best darn pickles I've ever had. (Hint, hint, Vera....) 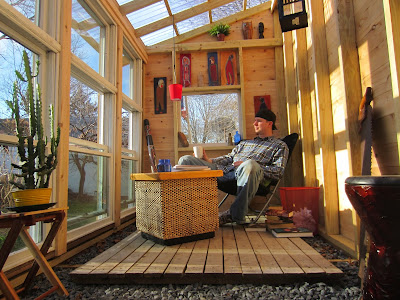 The Writing Retreat/Greenhouse- this one's within sight of the workshop locale too....

We'll ALSO cover...
Framing, deck building, alternative materials, pallet dismantling and construction-use, site selection, preparing for a build, a few post setting methods (for the base of your cabin), the dos and don'ts of building, safety, "redneck shortcut" tips, solar off-grid systems, and the overall weekend will give you a chance to pick the brains of several tiny house builders, bloggers, authors, geeks, and media hosts, on a one on one basis. Come with questions! BRING your tiny house plans to have them looked over too! 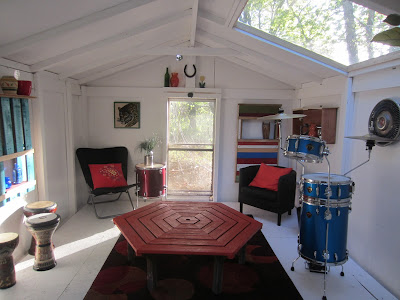 VISIT THIS CABIN (and many others)- a budget shed-conversion project Deek did for HGTV
Workshop includes Friday's pizza bonfire (we won't light pizzas on fire, we'll eat them...just in case...), snacks and drinks for the three days, course materials/packets, the provision of tools, and more. Camping on the premises is also a possibility.
There are hotels nearby, and Canton, MA is easily accessible from Boston/Logan airport. Oftentimes, attendees can pool together for rides too.

Cancellations- we can offer full refunds if you cancel before one month of the workshop. Beyond that we will gladly offer you a credit to take any other workshop that we host, but cannot offer a refund. This is standard for many workshops. 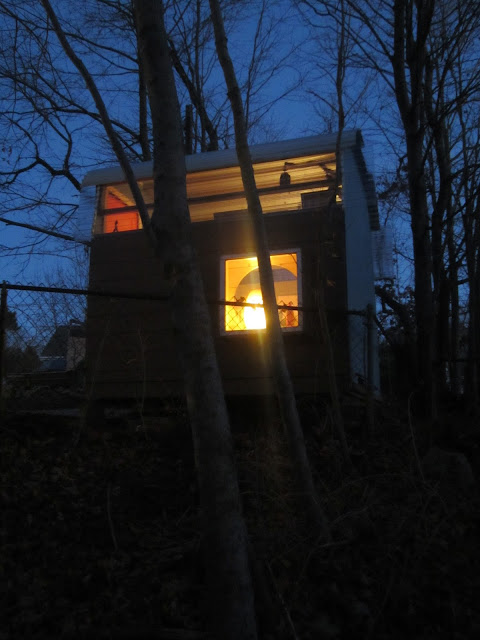 Above: "The All Eights Micro-Cabin" lit up at night during our last workshop. Built and designed by Deek (on a micro budget for The History Channel show "The United STATS of America").

Cost for the three day, intense course is $399.00
If interested, payment can be made to the paypal id: senorsell@hotmail.com,
By check (email me for an address if interested).... email via kidcedar at gmail.com
Or by credit card via paypal through this link....

WE MAY also have an opportunity or two for a work trade arrangement for those in need of such a set-up.... 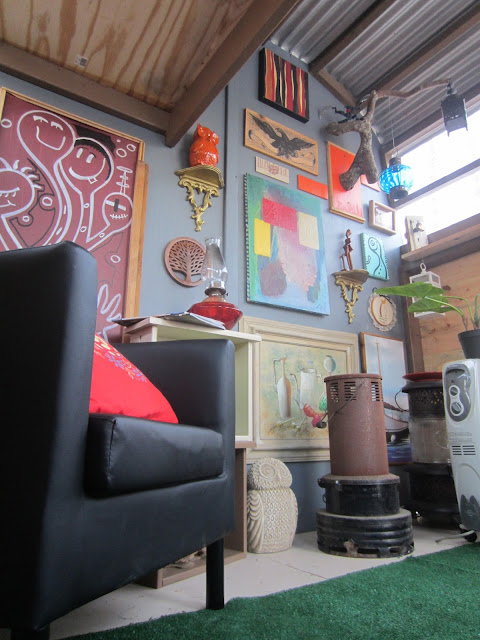 SEE this cabin as well! 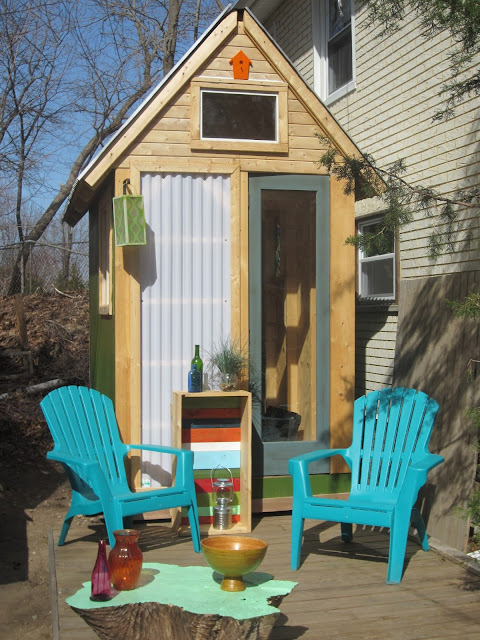 Deek's Vermont Cabin- Built by Deek starting at age 22 (with Dustin, when he was 18)
We'll talk about the triumphs, and mistakes made, with many of our builds.... 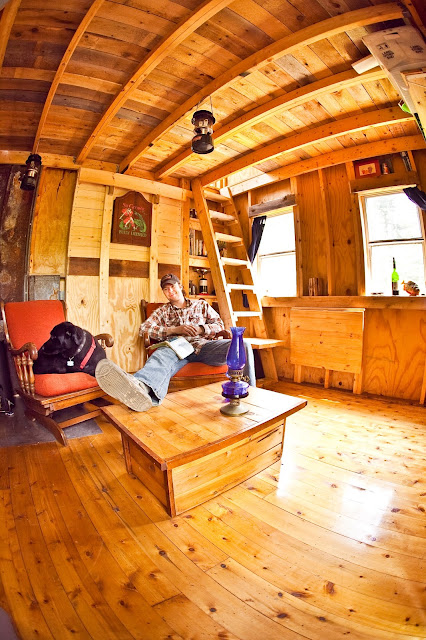 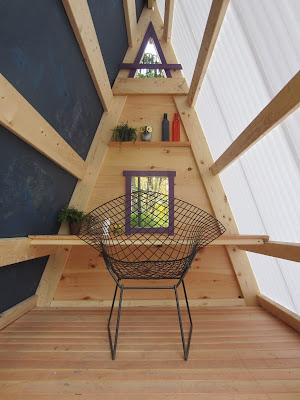 A micro A-frame office- built and designed by Deek for a client
ANY questions, let me know
-Derek "Deek" Diedricksen

Posted by Derek Diedricksen at 9:23 PM