(Above) Here's another few shots (now that its more "gussied up") of the cabin (one of TWO) we built in our one-day, sold out Relaxshacks.com workshop about three or four weekends back here in Massachusetts. We WILL have another tiny house building seminar/class, and it looks like this one will be in NEW HAMPSHIRE in 2012.....but nothings in stone yet. I'd love to do one sooner, but I have alot on the slate...

-Walden Woods "Tiny House Seminar" speaking appearance- Sept 10th
- Most likely a two-day display at the Deerfield, MA Craft Fair that I've been invited to.
-SEVERAL more "Tiny Yellow House" shoots for Make Magazine
-Another MA library speaking engagement
-Completion and assembly of a treehouse in NY that I built for a client (possibly doubling as an NPR shoot).
-Most likely building a writer's retreat for horror author John Grover (the guy's stuff it great!)
and more....

Back to the cabin- this thing could be used as a mini-office/retreat in your garden, a tiny weekender for one/two in the woods, a kid's playhouse or fort, or even converted into a chicken coop when situated in the shade. The deck is ALL cedar, the adirondack chair is made from recycled forklift pallets, and all the pillows, rug, table, lantern, and so on, are brand new. 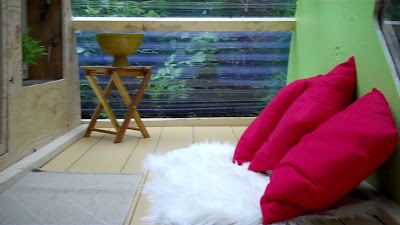 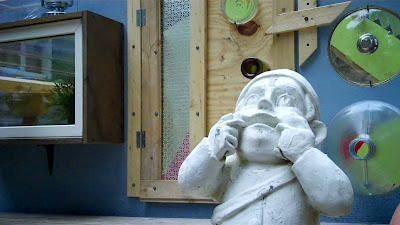 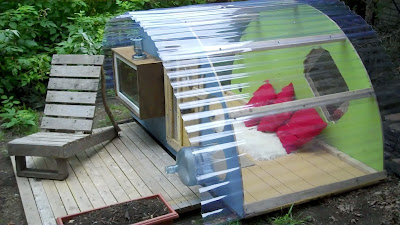 And yup, its based off an ultra-simple design and sketch or two in my NEW version of the book "Humble Homes, Simple Shacks"- which you can pre-order DAMN cheap....The ORIGNAL hand-assembled version of the book (that will have some drawings the new one WILL NOT) is still for sale through this blog too....(right hand column has a link).

We'll also get out my TOP TEN TINY/SMALL HOUSE BOOKS LIST up on the blog very soon. Its all the books that have inspired and wowed me the most- from Lloyd Kahn, to Dale Mulfinger, David and Jeanie Stiles, Dan Price, and beyond....