The New York Times- and A WHOLE LOTTA "SCHTUFF" GOING ON with our show/future mini-cabin.house projects

Note: This is DAY ONE of our new site locale- if any probs- you can still check out all the old posts, and order the book at the OLD SITE/BLOG... we'll slowly be moving hundreds of our posts to this new blog spot.

Our mini-cabins are now for sale (The Hickshaw, The Boxy Lady, and The Gypsy Junker)- scroll wayyyy down for info...and the "why"....(mainly we wanna build more NEW things to film, blow up, push off cliffs, and we're running out of space to store these lil' classics). Don't worry, if they sell, we will have more/other stuff to showcase to attendees at our 2011 Hands-On Tiny Shelter/House Workshop in MA....

TINY YELLOW HOUSE- OUR VERMONT CABIN EPISODE...
To any new readers, esp. those coming from The New York Times feature, out today (Thurs)- WELCOME. And for ALL, here are MANY informational updates on our tiny house videos, micro-shelters, cabins, and my book (which you can order from the side column). Please do- and please be patient if you order one- they're ALL hand assembled- and I am but one guy, (in his pajamas, with a six-pack of PBR, making lots of post office trips when I can (not in my pajamas)).

Aside from that there are TONS of things going on....and I posted some of our archived videos in the midst of all this for some of you to check out. Two of what I feel are the better/more fun, ones from our past work/collection.

TINY YELLOW HOUSE #1- "THE HICKSHAW" CABIN- the original "goof" episode that spawned the rest of what we've done...
You can watch ALL our other videos HERE
First off, we're hoping to perhaps take the "Tiny Yellow House" TV show on the road at some point and film some more substantial cabins, homes, and treehouses- basically, showcasing the work of others alongside our own. Seattle would be a place we'd love to hit, but funding would be needed if we're to get the crew traveling for a multi-episode project. Several New England locales are also in the planning stages/an option- some CRAZY places/houses all in all! As always, if you'd like to reach a TON of people, we're looking for sponsors/backers (ad placement), AND if you'd simply like to make a donation and get your name in a future-episode (thanks you's)- senorsell@hotmail.com is our donation account. Heck, any huge donations and we might put YOU in the episode...seriously- you'd have to cover travel to meet us though.... 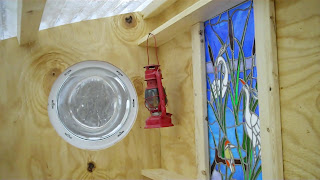 We're still hard at work on some micro-treehome/homeless shelter prototypes (photo above- and check the link for more)....Much more is to come on our $100 multi-faceted "GottaGiddaWay" shelter- which will be built to a larger scale down the road.....this will be shot for an episode for us, or Make Magazine eventually too.... HERE are some more photos of this TINY shelter.

AND....myself and Bill Bracken, and the band I'm in-Age Against The Machine-are going back into the studio soon (yes, the show's music is US too) to work on some more material for TYH. Recently-ish, Bill and I wrote a song that Gary Cherone- Frontman for Extreme/Van Halen/Tribe Of Judah sang on.... you can check it out HERE/download it for $0.99. If we get enough downloads, we can then afford half a Clark Bar! A certain professional sports team might be using this song SOON too...we'll see....

Otherwise, thanks for stoppin' in....more to come, each and every day....

Oh yeah, the three micro-cabins in my yard are for sale- all proceeds will go towards shooting and building mini-frankensteinic shacks for our shows.....I've tweaked a few things on them more recently/put some new work into them too...
The Hickshaw- $1500
The Boxy Lady- $2000
The Gypsy Junker- $3000
The Fold Down Fort- From Make Magazine/TYH Episode- $600.00
Kid Cedar At Gmail Dot Com for inquiries....

The $200 microhouse/microhome in the New York Times newspaper by joyce wadler- tiny houses, shacks, cabins, forts, homes, cottages......
A HOUSE tour is the highlight of a visit with a proud homeowner, but when one drops in to see Derek Diedricksen, who makes playful micro-shelters out of junk, it is less so. Possibly because the temperature up here on a cold winter day is less so, possibly because his square footage is less so.
At about 24 square feet, the Gypsy Junker, made primarily out of shipping pallets, castoff storm windows and a neighbor’s discarded kitchen cabinets, is the largest of Mr. Diedricksen’s backyard structures. The Hickshaw, a sleeper built on a rolling cedar lounge chair (or as Mr. Diedricksen calls it, “a rickshaw for hicks”), is considerably smaller, at 2 1/2 feet wide by 6 1/2 feet deep. The Boxy Lady, two cubes on a long pallet, is the smallest: 4 feet tall at its highest point.
For ingenuity, thrift and charm, Mr. Diedricksen’s tiny structures are hard to beat. Made of scavenged materials, they cost on average less than $200 to build. They often have transparent roofing, which allows a fine view of the treetops, particularly in the smallest ones, where the most comfortable position is supine. They have loads of imaginative and decorative details: a porthole-like window salvaged from a front-loading washing machine, a flip-down metal counter taken from the same deceased washer. Mr. Diedricksen hates to throw anything away.
Still, the structures are neither warm nor commodious, and the reporter’s note-taking is hampered by blowing on her hands. It is so cold, in fact, that in deference to the reader, whose nose is no doubt starting to run, we shall go indoors for a spell, that one might consider Mr. Diedricksen’s accomplishments in comfort.
They are many. There is his self-published graphic instruction book, “Humble Homes Simple Shacks Cozy Cottages Ramshackle Retreats Funky Forts,” the first edition of which was “hand-assembled” and “locally printed” (in his living room); having sold 1,500 copies, it will be reissued by the Lyons Press next year. There is his YouTube series, “Tiny Yellow House,” which is shot whenever his brother-in-law, a videographer, has some free time, most recently in the auto-body shop of a fan because, as Mr. Diedricksen notes, when it is 10 degrees you don’t want to film outside.
Mr. Diedricksen makes a living doing carpentry and spends a lot of time as Mr. Mom to his two young children, but he has also been a comic book writer, a D.J. and a home inspector, and is a drummer in a Rage Against the Machine tribute band called Age Against the Machine. (The World Wrestling Entertainment theme song for the wrestler Jack Swagger, “Get on Your Knees”? His band wrote that.) Even the little structures he makes, with their multiple uses — fort-guest bedroom-festival sleeper-homeless shelter — are tough to categorize.
It’s hard to figure out how to describe him, Mr. Diedricksen is told.
“One reviewer called me ‘a mad scientist with too much lumber on his hands,’ ” Mr. Diedricksen says. “Another one called it, ‘This Old House Meets Wayne’s World.’ ”
That may be because of the “Harold and Kumar”-esque, moldy sleeping-bag vibe of the “Tiny Yellow House” series, one episode of which includes Mr. Diedricksen’s real-life neighbor yelling, “Diedricksen, when you gonna clean this mess up?”
Or because of Mr. Diedricksen’s ponytail, which he has since cut. Or because of the episode that ends with him picking his teeth for the camera. “Pizza mouth?” he asks.
One should also know that Mr. Diedricksen, 33, graduated from Northeastern University summa cum laude.
Is Mr. Diedricksen committed to building only tiny structures?
“I have only so much yard space and my wife is only so tolerant,” he says.
Mr. Diedricksen’s wife, Elizabeth, is a physical therapist. They live with their children and a large dog in a 950-square-foot house about 10 miles south of Boston, which they bought in 2002 for $190,000 — a fixer-upper, of course.
Stop by to visit with Mr. Diedricksen, and you’ll have to wait till the kids take their naps to talk. Having a tiny-house enthusiast for a dad would seem to be a great thing: Mr. Diedricksen made what looks like a large painting in the living room, but which can be pulled down to sprout orange flaps: an instant kid-size tent.
Posted by Derek Diedricksen at 5:34 PM