Deek, David Stiles, and Joe Everson team up on a "Transforming A-Frame Cabin" 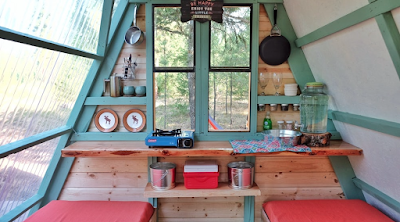 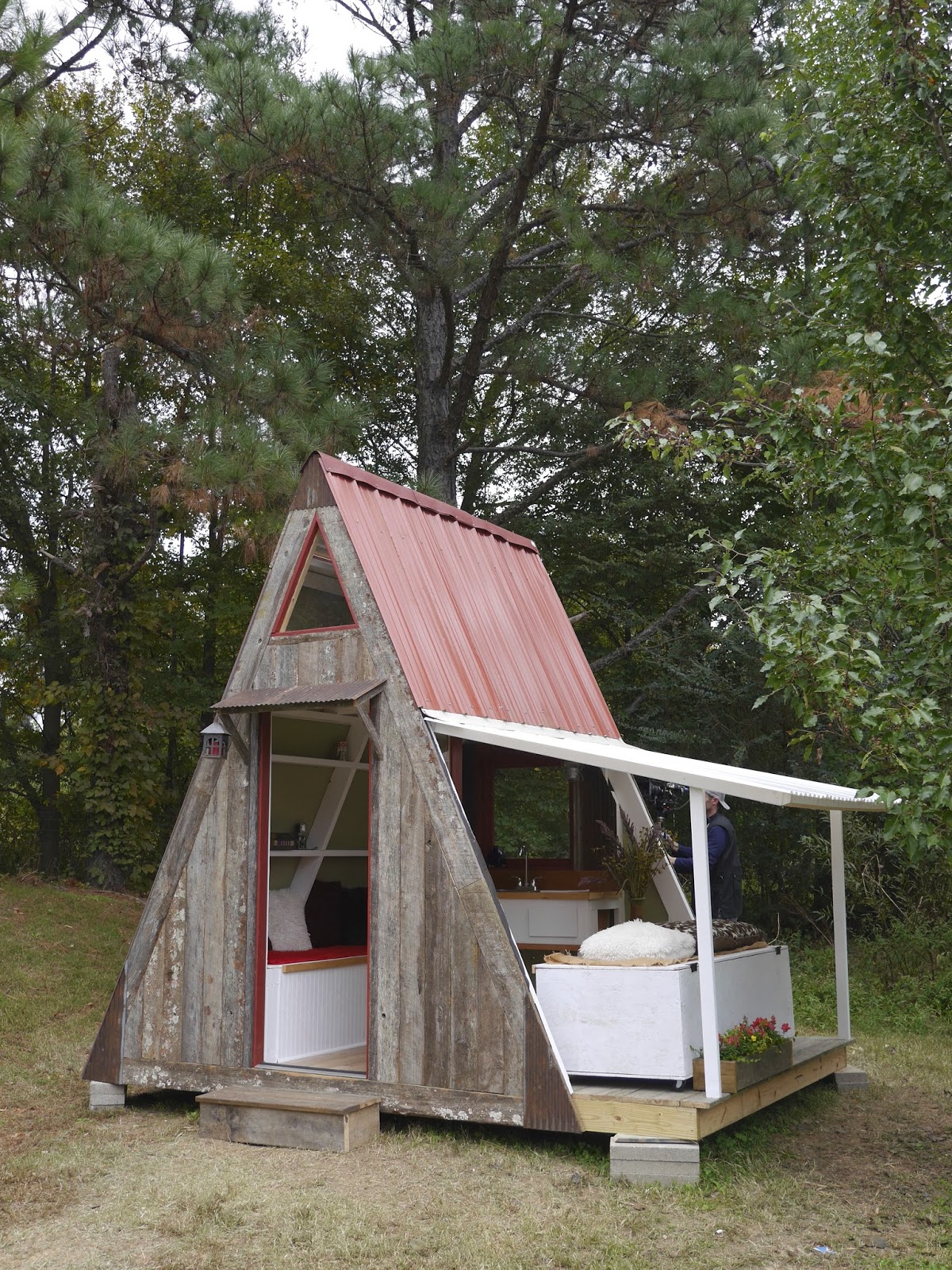 Above: (A Rustic Version) The A-frame in "expansion mode"- without its rolled mosquito nets dropped yet.
We'll have a few photos here, but Steven Harrell of www.TinyHouseListings.com will have MANY more soon...

So, quite a ways back, since I had befriended the NYC author/architect duo David and Jeanie Stiles ((who have written countless books on building sheds, cabins, tree houses, tiny houses, and forts), and who later went on to write the foreword in the re-released version of my book "Humble Homes, Simple Shacks")), I approached David with the idea of a cabin-design, or plan-set, team up.

"David, I'll design the cabin, give you a bunch of specs and the layout details in my sketch work, and you give it the Stiles' artwork touch and make it into a more readable plan set. How 'bout it?" I asked.

"Lets do it", he replied. (Check out the work of David and Jeanie Stiles at www.StilesDesigns.com- GREAT stuff!)

Below: One of the later pages of the plans, showing a cutaway for bed, sink, and rainwater catchment placement…. 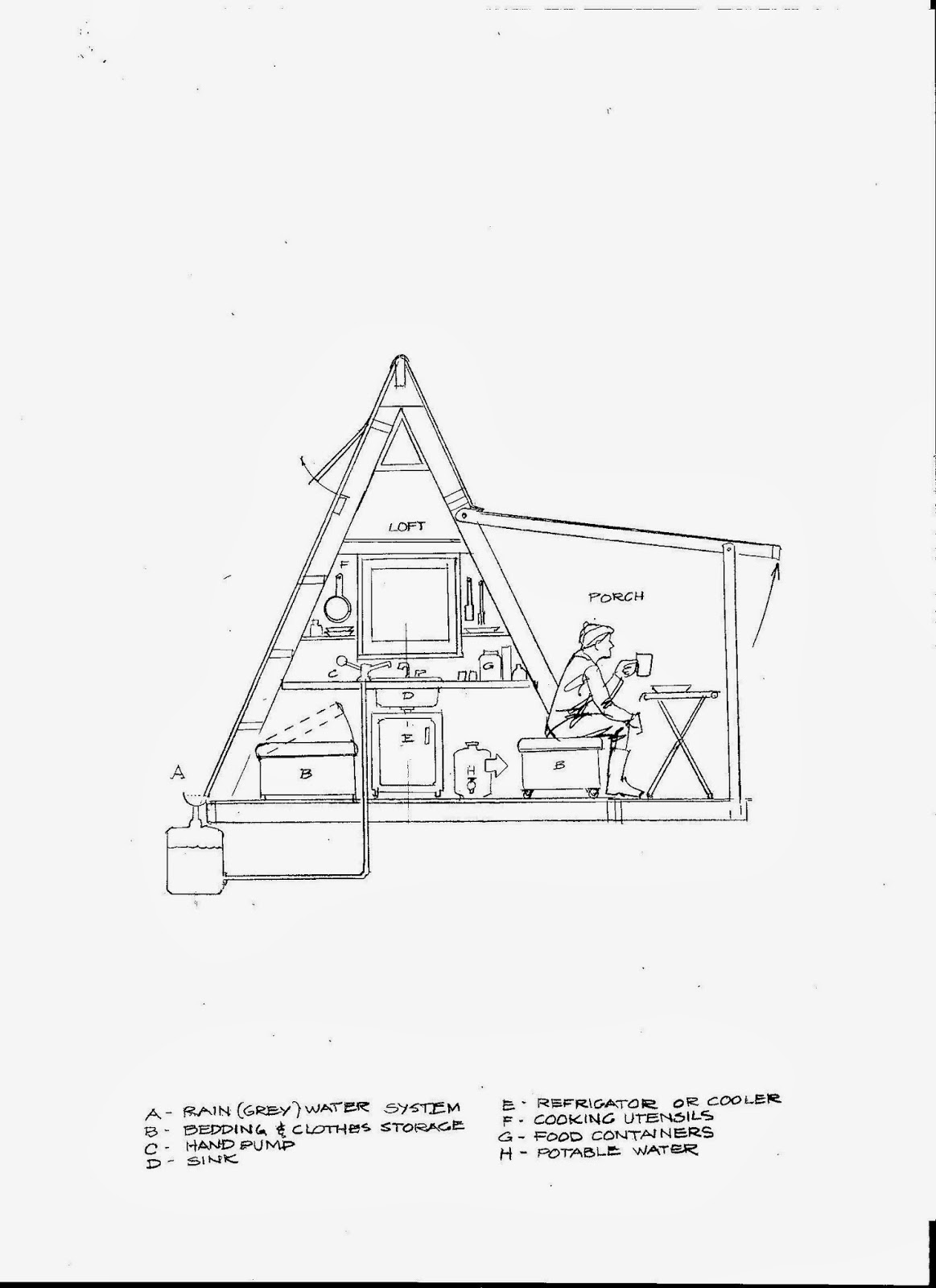 Months and months later, as, well, we're both just a little bit busy with other projects, the plan set is now done, a prototype/1st version of the cabin has actually been built (in fact you'll see it at our Memphis, TN-area HANDS-ON, three day tiny house building and design workshop- April 11-13th), AND we shot a full video tour of that very cabin, which we'll have very soon on my youtube channel. www.youtube.com/relaxshacksDOTcom

Meanwhile, here's a glimpse or two of the plans (11 pages in all- with another SIXTEEN full page photos to help you along too), which are now up and available as a downloadable version. We'll probably have a print version available too, or if you want one, email me at kidcedar at gmail.com. 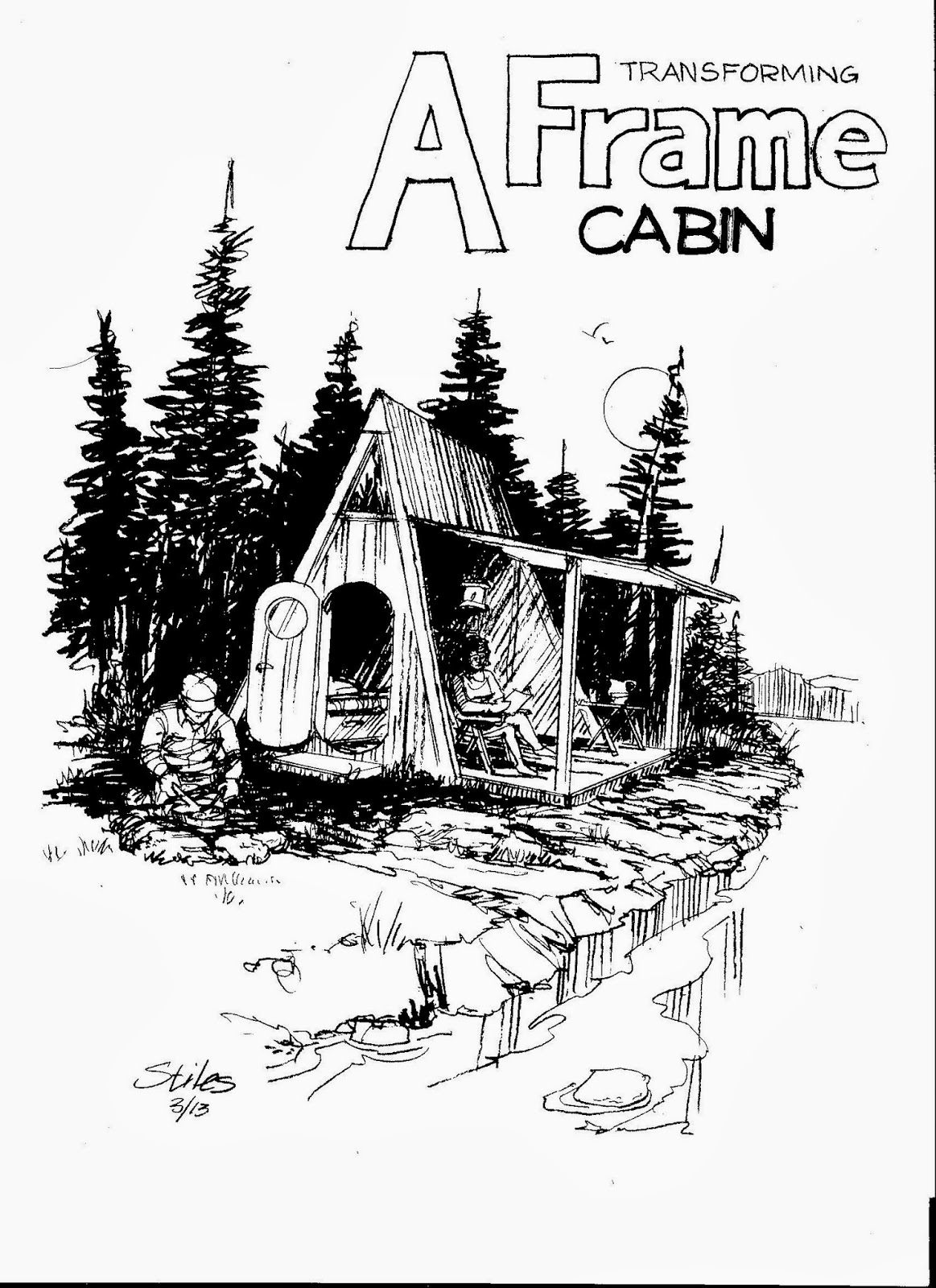 The idea was to keep it AFFORDABLE to build, EASY and QUICK to build, and to have it so that it could be altered for different uses, or added to, rather effortlessly.

The total cost for a cabin like this, soup to nuts, is right around $1200- and that's using city lumber pricing, meaning, elsewhere, it'd cost less to build. Add in some salvaged, free, or recycled materials, and you could EASILY build this under $1000.

The plans, should you choose to pick up a set, also recommend, and explain, some other versions, or changes that could be made, so as to include more space, a bathroom, a larger loft, an easy addition/extension, and so on. 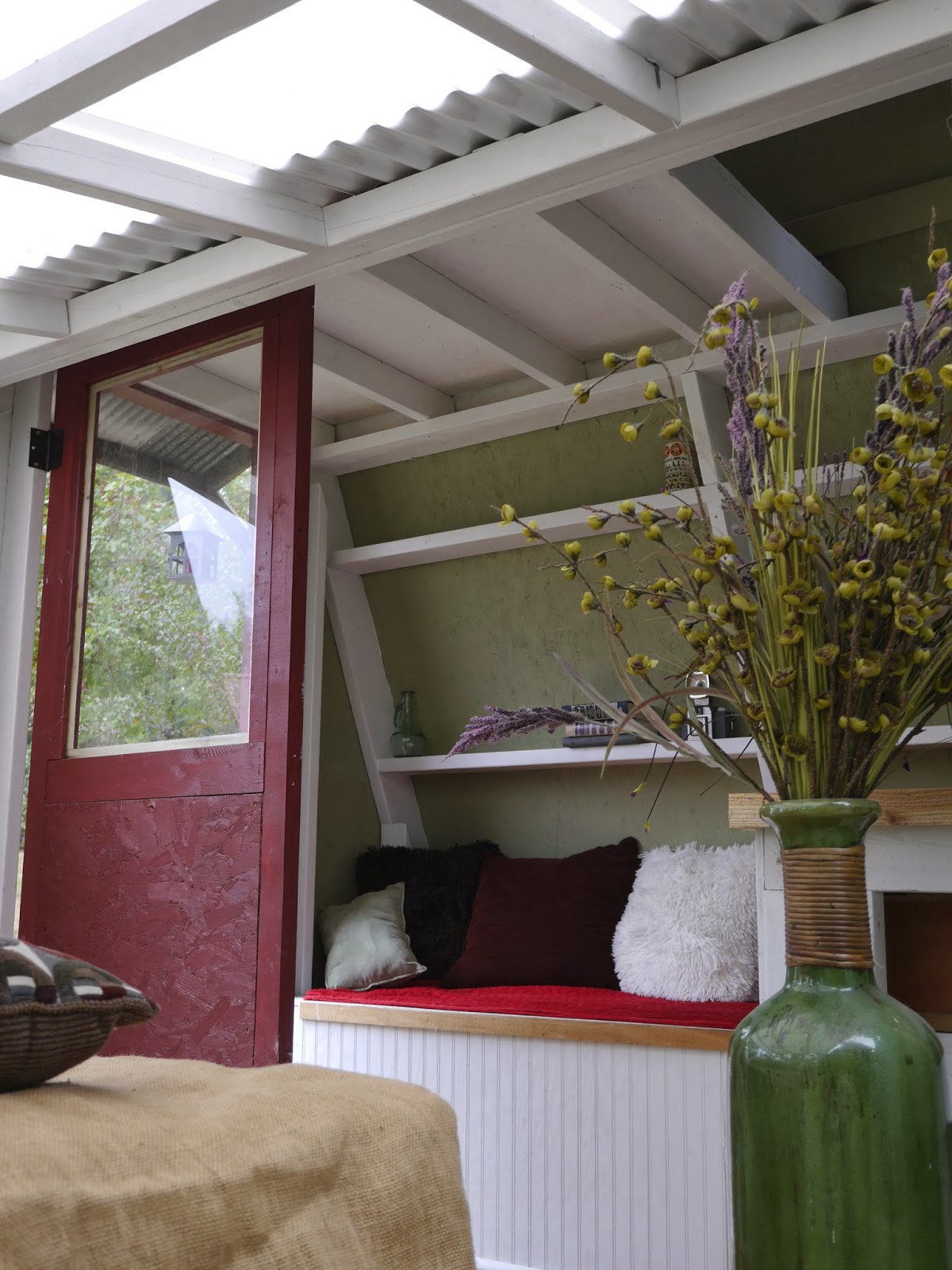 The cabin's main base is 80 Square Feet (10' wide, by 8' deep). When its roof opens up and its legs are dropped down to transform one end of it into a porch with roll/drop-down mosquito nets that velcro in place, the cabin increases to 110 square feet.

The standing room under the micro loft is 6' 5", and while the loft is mainly intended for storage, you can fit/sleep one person in it if you like- I've done it. 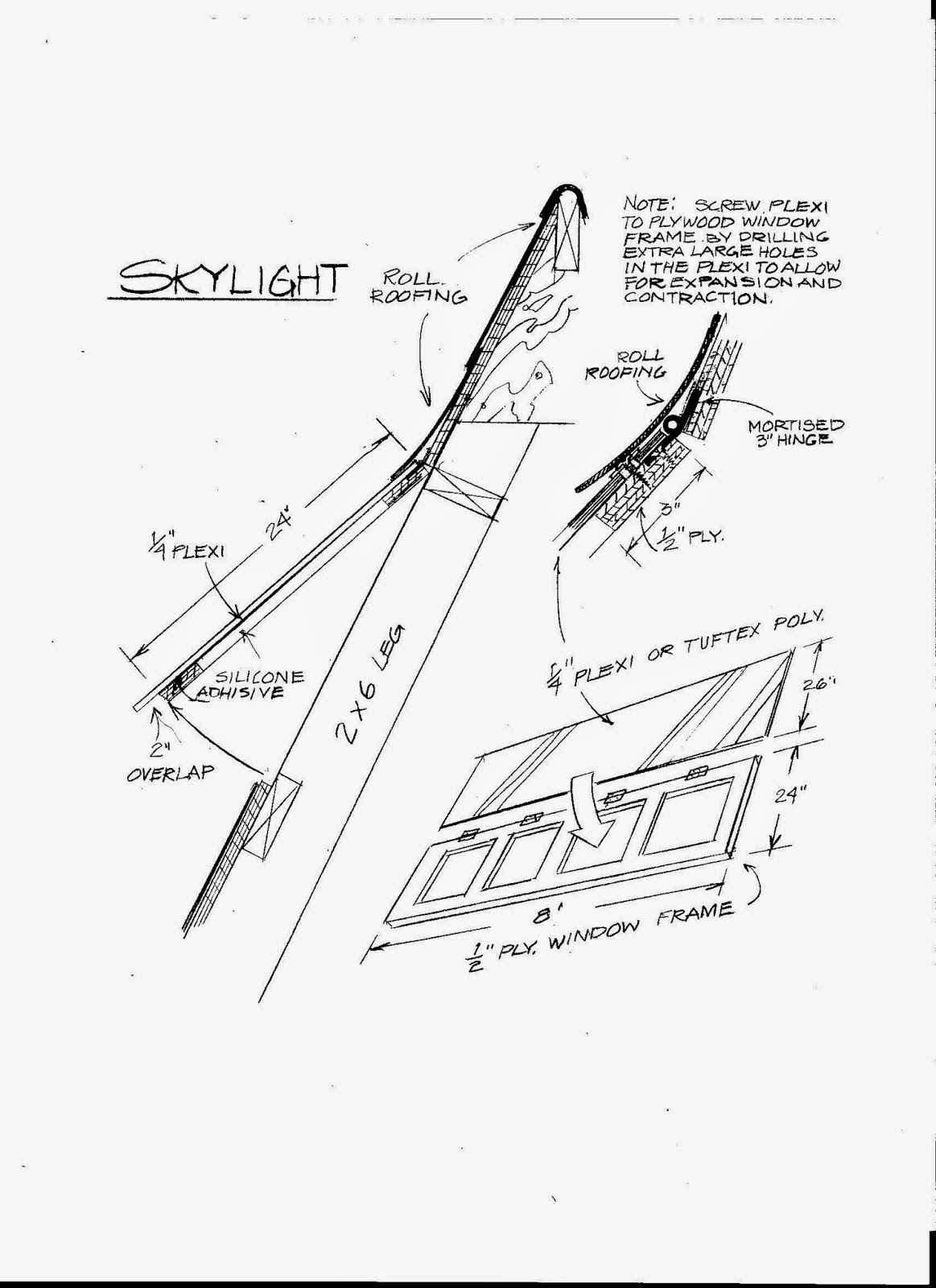 If you'd like to support us and pick up a plan set….

-Downloadable PDF version- 11 pages of plan sets and instructions, and 16 full page photos to help you along your path. You also have an open link to ask us questions during your build.
$29.95

-PRINT VERSION of the plans- mailed to your door….

US mailed- $40.00
Canada- $45.00
No Overseas for Print Versions- sorry…. its just too expensive to ship, and requires too much paperwork

A BIG THANKS, I might add, goes to Joe Everson, of www.TennesseeTinyHomes.com and www.TinyHappyHomes.com. This is the very first time ever that I designed a cabin and didn't actually build it myself- I just didn't have the time. Joe and his crew built this cabin, in record time, did a fantastic job, and have allowed us to leave it on site of his tiny house workshop/compound in Tennessee, so that students at our April workshop (2014) will be able to see it- alongside 5/6 other cabins. 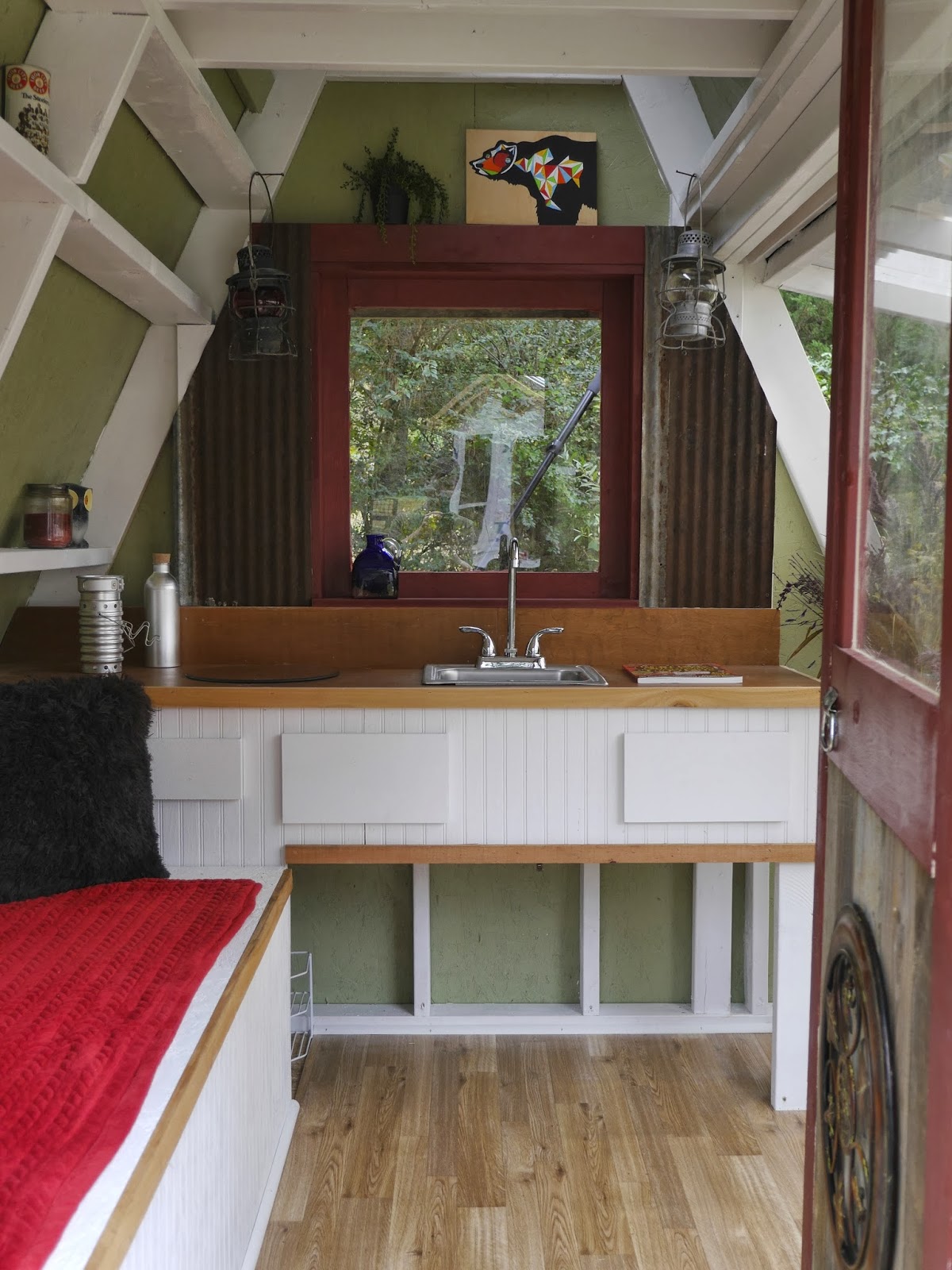 Again- this cabin will be one of SIX or so that you'll get to see/tour at our HAND-ON TINY HOUSE BUILDING AND DESIGN WORKSHOP near MEMPHIS, TN- April 11-13th. We'll build THREE STRUCTURES together, hear from some incredible speakers, authors, bloggers, builders, architects, and designers, AND take a field trip to Beale Street one night!
There's LIMITED SPACE- so before April 11th, 2014, sign up at the banner on the top of ANY page on www.relaxshacks.com 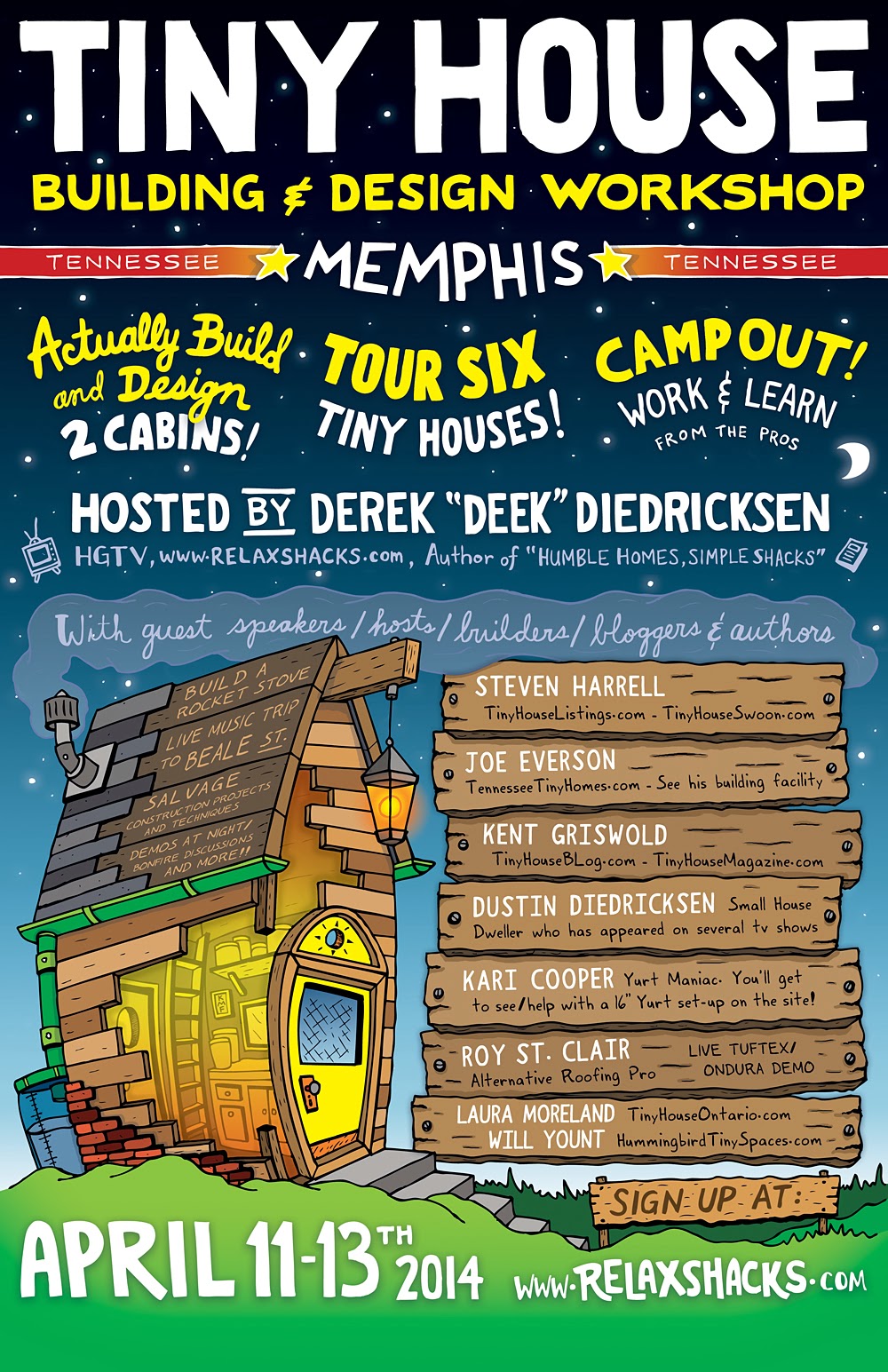 Posted by Derek Diedricksen at 3:41 PM