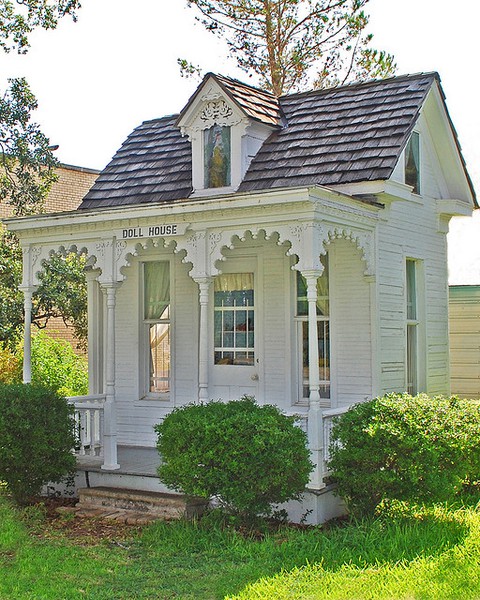 From the Seguin, TX Historical Society's Website (and thanks to Don Siders for pointing us in the site's direction).


The Dietz Doll House is one of the Seguin Conservation Society's most charming properties and like the others, comes with an intriguing history. It was built in 1910 by Louis Dietz for little Alice O'Brien, 5 years old, who had come to Seguin as an orphan train child.
Alice was born on May 28, 1905, in the New York Foundling Hospital in New York City. In those days, orphan or homeless children were transported by train to various small towns throughout the United States for adoption. In Seguin, Alice was taken in by John and Julia Magin, but nine months later, Mrs. Magin died. A German-born carpenter, Louis Dietz and his sister, Miss Mollie, applied to the Catholic Parish priest to raise Alice in their home.
Alice moved to her second home May 10, 1910, about the time Louis Dietz built the Victorian doll house for her. The little house was originally located on the right side of the tree-shaded back yard of Louis and Miss Mollie's house at 423 N. Milam Street. Some people in Seguin remember that in the 1920's The Doll House sat at the left side of the Dietz Cabinet Shop facing N. Milam Street. In time, The Doll House was moved again to create an entrance for the Dietz house.
Louis worked in his cabinet shop next door at 427 N. Milam Street. He built ornate furniture and crafted unique items of wood — rocking horses, gray elephants, humpback camels, and animals on wheels. Another of his specialties was making different kinds of wooden fruit - bunches of grapes and watermelons. Equally distinctive were decorative clock shelves painted to look like marble. A child-size wardrobe and dresser made by Louis are on display in The Doll House.
Pablo Castilla and his son, Ralph, gave the Dietz Doll House to the Seguin Conservation Society in 1967. See it next to Los Nogales Museum at 415 S. River Street.

If you're going into tiny house living for simplicity, and lack of maintenance. this might not be the model you want to emulate though- that scroll work and fancy trim would be more than a pain to paint.